By Dr. Becker and Diane Weinmann 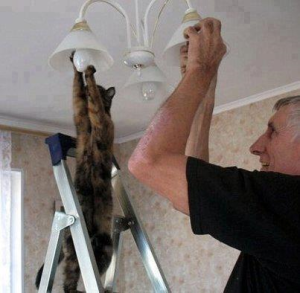 As cat people we know they are let’s say…unique! We expect odd behaviors from time to time and we love them for it. If you are a cat person you are totally different from a dog person and you know it!  Let’s explore some of the unique characteristics of cats:

For example, most kitties figure out early in life that a human sitting on a toilet is a captive audience and the perfect target for some leg bunting (this is when your cat repeatedly head butts your lower legs and rubs against them).

Bathtub time is their’s also…don’t think you are going in to the tub to be alone and have a nice quiet soak..oh no, your cat will still want your attention! My cat used to walk around the rim and once or twice has inadvertently joined my husband in the tub quite a shock for them both!

Needless to say, this isn’t a two-way street, so don’t dare even look in the direction of kitty when she’s busy in her litterbox.

More than a few clever cats have figured out how to work door handles after being locked out of rooms in “their” house.

Don’t get me started on the paws under the door reaching for help when they are locked in a specific room!

That’s why kitties tend to stretch out in patches of sunshine wherever they may fall – on the floor, on furniture, on a windowsill, or right in the middle of your desk or the kitchen counter as you’re working.

Learning the spots where sunshine falls and clearing them ahead of time for Miss Kitty is the least you can do for She Who Will Not Be Denied.

It also includes your ankles if kitty happens to be stalking you as you walk from room to room, and your toes if you move them underneath the sheets as you sleep.

The good news is that once kitty has caught you with a quick swipe or dig of his sharp claws, he’ll take off the second you scream out in pain. Until next time.

Also good news is that pests like flies, mosquitos and moths don’t stand a chance and are really affordable toys for your feline!

Short of that, he’d like you to at least show some respect for his delicate sensibilities and warn him before you turn the horrible thing on.

Cat guardians realize this is just a feline’s way of being sociable. Your kitty is looking for attention and affection from you. You can try turning him to face you, but take no offense, since none is intended. Smell me!

Many cats also head bunt the top of their human’s head. If your kitty does this, she’s rubbing her scent on you so that everyone knows you belong to her. Now you’re in their “club”!

People with elderly cats are often awakened multiple times during the night by throaty, sometimes blood-curdling yowls, howls, and meows. The first few times it happens, we leap from our beds, sure a knife-wielding cat slayer has snuck into the house. Next, we visit the vet to make sure the otherworldly noises coming from kitty aren’t health-related.

Finally, we devise ways to sleep through the midnight wailing, because as we’ve also learned, there’s no “shushing” a cat. Just know that you house will not be desirable to a burglar if your cat is “cat-r-waling” at the top of his lungs!